Without dispute, 2012 was a record breaking year at many levels for Mobile App Marketing, Mobile App developers, App markets, and ultimately, consumers themselves.

Yes, the numbers below have definitely changed since releasing this article. Any numbers associated with App downloads, and Apps available in markets, are slippery suckers. We know some authorities hesitate before publishing these numbers, knowing there is usually instant, and vocal feedback regarding their freshness. But, let’s have a go anyway !

Get ready for some BIG numbers …… 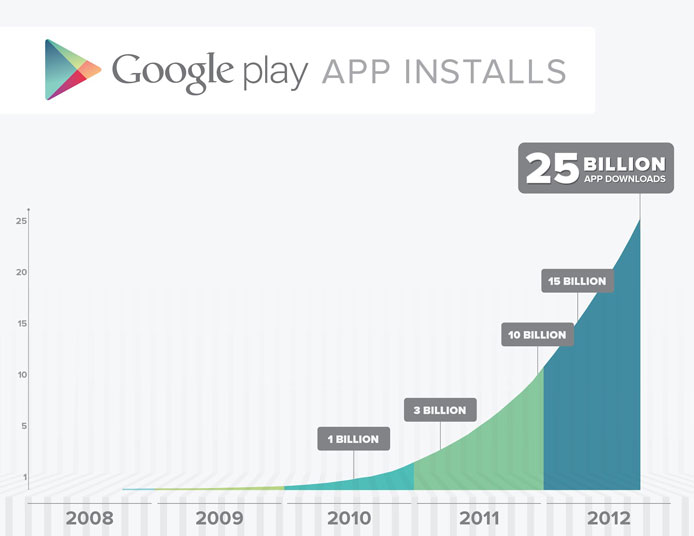 Which Mobile Apps, then, can be considered as the being the best Mobile Apps of 2012?

This popular mobile app was designed to help users stick to their personal or even professional goals.  Traditionally, whenever a new goal is set, it is very hard to get off to a good start and it is often harder to stay on track.  This app provides users with reminders of their goals each day and even throughout the day, helping them to continually progress towards reaching them. Start off with ” I will …. every day”, set up the reminders and off you go. Commit is available in iTunes, while the Android alternative is an App called Habit.

Instagram definitely inspired millions of people to take pictures just to be able to share them with their friends and family members, so the makers of Cinemagram developed this popular app to allow those same people to send images that seem to come to life through animation ( via GIF technology ) to their friends and relatives as well. A video enabled version of Instagram, if you will. It allows you to make 2-3 second videos with some very cool filters of its own. Cinemagram is available for free for iOS.

With over 1200 stores enabled, this is the ultimate buyer’s guide that not only identifies where the best stores are in a particular area but also where you can find specific items that you may be looking for in that area as well. All stores and brands contain GPS coordinates … how cool is that ! It even has a feature allowing for offline browsing, meaning no more expensive international roaming bills. Get it now on Google Play or iTunes.

While the iPhone version has been available since 2011, its release for Android now offers a popular way for users to share music. It is a great way to discover new music as well as become a world class DJ while you work or while you are at home. Turntable.fm is probably one of the ‘funnest’ music apps that was released in 2012.  This is because you can use any of the music on your phone to play for an audience represented by avatars and have it scored by applause. This fun and interactive game lets you score points for making good song choices and also helps you to discover a variety of new music. Did I mention it was free ?

Why are some pundits calling Hootsuite the best social media management system ever ?

Well, it could be because tracking and managing your own social media presence has never been easier using this free app. If running your Facebook and Twitter accounts efficiently is a challenge, then this is the App for you. You can even manage Linkedin and Google+ Page accounts as well.

If someone had told you that this App is the easiest way that you can edit a movie, you would probably say ” Lay off the sauce !”. But surprisingly, it comes as close as it gets. Instead of using painstaking video software to edit your own movie, Magisto will simply take all of your video clips, analyze them and then compile them into a movie complete with soundtracks of your choice. Words of warning: their website says that the music on their servers are licensed, but if you want to load the final video onto 3rd party services like Youtube, you will want to delve deeper into their terms and conditions. Definitely worth a look, as it is heads and shoulders above some of the other alternatives. Free for Android and Apple.

“The feathers are strong with this one !” This creation is the fruit of two giant phenomena, and is another excellent game from the very popular angry birds series. By using all of the Star Wars characters they have created one of the best mobile gaming apps of 2012.  Say no more. This App is free ( ad-funded ) on Android and .99 cents on iTunes.

This free mobile app has been coined the “Social GPS”. It is a fantastic driving application that will help you get GPS directions like never before on an Apple device. Previous navigation devices have been slow and clunky, and the jury is still out on Apple Maps. Waze has a surprising amount of options and uses crowd-sourced information to deliver up-to-the-minute traffic info to your smart phone.

Find a video on your smart phone, and decide you want to seamlessly watch it later on your PC ? This App is for you. Save all of your viral videos, URL links, and updates that you want to cherish forever all in one place with this popular mobile app. Formerly known as Read It Later, this mobile app allows you to bookmark anything you may come across on the internet, and ALSO sync it to all your other digital devices, namely your smart phone, tablet or PC.

Another terrific app that allows you to synch seamlessly across between devices. Evernote makes it super easy to jot down a quick reminder, note, or even something longer and it automatically syncs in the cloud, so there is no longer any need to remember where you immortalised your last thought. Free for iOS, Andoid, Blackberry & Windows, does it get any better ?

Skitch ( clever name ), lets users use arrows, shapes and other annotations like text, to illustrate images, so that they are more visually expressive. If you want an easier way to share ideas with colleagues while brainstorming, highlighting photos for friends, than this is an amazing productivity tool to consider. Available for Android and iOS at no cost. UPDATE: Skitch is now owned by Evernote, so an Evernote account is required for Skitch to work, so why not get both !

Now, are these the definitive game-winners of 2012. Maybe, maybe not. But they are certainly worthy of consideration for the title. We have seen organisations publishing the Top 100, 200, even the Top 230 Apps, it is certainly getting more difficult to choose and advise. One thing is for sure, we as consumers, are spoilt for choice. I have already started researching & compiling Top 10 lists in various categories; Productivity, Games and so on, and these will be published in due course. Stay tuned, and Appy downloading  !