After nearly 20 years since the birth of the World Wide Web, research is finding that people are spending more and more time having the “web experience” on sleeker, slimmer Mobile Apps, than on the traditional ‘net.

According to Wired.com , this is the beginning of the new paradigm. The digital revolution has peaked on the Internet and is slowly but surely finding its way into App stores, whether it’s the Apple iTunes store or Google Play ( Android store ). With the advent of HTML5, it almost seems inevitable.

An analysis by Flurry, a mobile analytics firm has indicated that people are spending more time on average in Mobile Apps than on the Web. While the data is rather raw at this juncture, it is still possible to see the directional basis with which consumers are utilising digital consumption.

In fact, as one can see in the Mobile Activation graph below, the number of growing Android device activations alone is staggering . It is predicted that Android activations may soon outrun those of Apple. 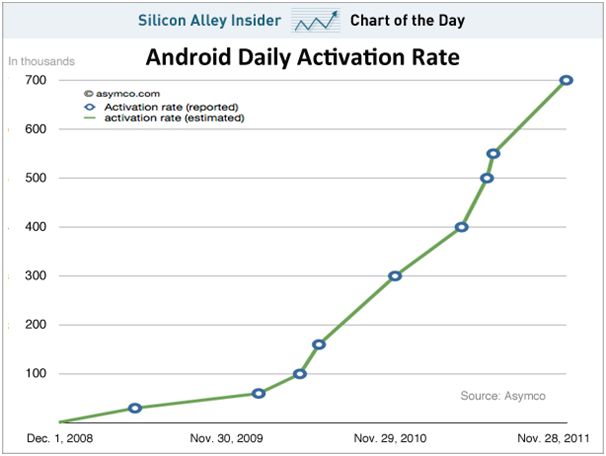 For all those naysayers, who claim the Web is not quite dead, there is relief from Morgan Stanley who predicts that within 5 years, the number of people who access the Internet from Mobile devices will surpass those that do so from their PC or Mac. So even as an access device, Mobiles will reign supreme , if they don’t already.

Mobile penetration per capita is extremely high in countries such as Australia, passing the 115% mark in 2012, according to Telsyte.com . Concierge services, as well as M2M services will see search moving from the Web to Mobile Apps as we speak.

If your business is to survive the next wave of digital marketing competition, it is essential to start preparing a strategy, if not a Mobile App presence, sooner rather than later.

For more information, please contact the Webmentum Crew at Webmentum.com .